…Loneliness takes shark-sized bites out of your soul…

…You or someone you love is fighting a bitter battle with illness, slipping inexorably — and there’s nothing anyone can do about it…

…Money problems are driving you crazy… you are ashamed to look people you owe money in the eye… you cross to the other side of the street when you see them at a distance, trying to avoid them…

You’ve tried everything… but these problems still hound you! Why is that?

Why are you still suffering?

You have been praying… maybe you used segulos… you went to mekomos kedoshim… so why are you still in pain??

Why hasn’t Heaven answered you yet?

What is holding it back?

THE "COST" OF DELIVERANCE

In fact, He wants to give it to you much, much more, in fact, than you want it! But it’s just not possible.

It’s not possible because your "spiritual pipeline" — also known as "mazel" — is clogged. And that prevents the Heavenly bounty from reaching you.

There are many reasons for the accumulation of "dinim", most of which we cannot understand. Sometimes, past sins — even those of previous incarnations!! — can stand in the way. At other times, it’s simply because we’re only human and not perfect. But whatever the reason, after a while the flow of G-dly bounty narrows to a trickle…

…and that is when the problems start!

You simply MUST unclog your mazel and find the "detergent" — the prayer that dissolves the dinim.

And that is where the problem is:

…A prayer of a tzaddik, one that comes from a pure heart, is FAR more powerful than your tefillah. And the greater the tzaddik, the more powerful and effective his tefillah.

…Praying at the gravesite of a great tzaddik increases the potency of a tefillah thousands of times over.

…and praying on specific the yahrtzeit — the day of passing — of a great tzaddik multiplies the power of prayer immeasurably.

…Within less than a week an event will take place that can blow the doors off your own private prison of suffering and despair, and put all you ever wished for within reach.

It’s a three-step process that will:

Like all great fortunes in life, it is a matter of making a move with the right person, in the right time at the right place.

There is no other figure in the annals of Jewish history that equals Rachel Imeinu — "Mama Rochel," as this mother of Israel is known — when it comes to having the power to avert Heavenly anger and bring mercy, redemptions and flat-out miracles upon her children throughout the generations. This is why prayers prayed at her gravesite effect miracles.

"We were beyond despair," says Ruthi. "We were married for 12 years but had no hope of ever holding our own child. I heard of this special segulah, the tikkun of praying for a whole year at kever Rochel, and we did it. Mama Rochel asked for us, and against all odds, we had a son. We called him Yonatan, meaning "Hashem has given." The bris, of course, was held at kever Rochel.

"Don’t hesitate," Ruthi urges. "If you need anything — especially one of the three yeshuos of Rochel Imeinu: shidduchim, children and Heavenly protection and safety — do not hesitate. Call your Mother Rochel."

The reason why Rochel Imeinu has such power to wipe away Hashem’s anger when it comes to shidduchim, children, and general protection is because she sacrificed herself for the sake of Yaakov Avinu and her sister. She was willing to give up her own marriage just to prevent her sister from being shamed. She is the one that gave away the Heavenly merit to give birth to the holy tribes of Israel for the sake of her sister. And she was the one that was willing to be die for the sake of Israel and buried outside of Me’aras Hamachpela in Hebron, the very gateway to Gan Eden, just to be there for her children when they go into exile.

"My experiences with the miracles of Rochel Imeinu simply cannot be believed", says Tzipora Roth. "I first turned to Mama Rochel when our son was already 35 years old and had never been married. Within less than a year he got married."

"But that was just the beginning."

"My grandson could not speak until he was 10 years old! Maybe it is more correct to say: until the tears at kever Rochel. One day during candle lighting, my daughter joked with him and told him to speak to me… and suddenly he did! He did! We were crying and couldn’t stop. We just couldn’t stop."

"Two years later I was diagnosed with cancer. I ran to Mama Rochel! I underwent two operations and my doctors thought there was no hope for me. But I turned to Mama Rochel, and the rest is history. I’m cancer-free over 5 years now. If you want to talk to me, just call me at 052-390-2594 in Israel."

THE CHANCE OF A LIFETIME… JUST DAYS AWAY!

The gravesite of Mama Rochel has always been the place to effect the greatest miracles in times of trouble in every aspect. The Rabbis of Mosdos Rachel Imeinu have seen literally thousands (!) of yeshuos and salvations that are literally too incredible to be believed — but they are true.

And no day is more auspicious to getting your every wish granted than the yahrtzeit of Rochel Imeinu, when her holy neshamah shines in the Heavens and her merit before the Heavenly throne is multiplied.

On that day, Rochel Imeinu can effect favors for the people of Israel more than any other day of the year. That day is Tuesday, the 11th of the month of Cheshvan (November 4th) — the yahrtzeit of Rochel Imeinu, a"h. On this day, the saintly miracle worker and mekubal, Rabbi Yaakov Ades, shlita, the son of Rav Yehuda Ades, Rosh Yeshivah of Yeshivah Porat Yosef and grandson of Harav Avaraham Chaim Ades, the Rosh Yeshivah of Yeshivat Hamekubalim, will hold a special tikkun שע"ה for people who need miracles and yeshuos in these three areas ONLY.

The saintly Rav Ades has revealed that, according to kabbalah, praying for a specific salvation at the gravesite of Mama Rochel for one year plus ten days (375 days, numerically spelling the Hebrew word שע"ה, from the verseשעה ברחמים וברצון אל תפילותינו — heed with mercy and favor our prayers) is the complete tikkun for people who are needy in those three areas. This tikkun, when performed in accordance with the divinations and contemplations prescribed by the holy Arizal and the Rashash, is the total rectification that is enough to wipe away harsh verdicts, even from people who could not be helped by anything else!

"I believe without a shadow of a doubt that all those who are fortunate to participate in this tikkun will be helped, im yirtzeh Hashem, this year," Rav Ades said.

Rav Ades, called the "Wondrous Rabbi" by his many admirers, will initiate the tikkun prayer at the gravesite of Rochel Imeinu on her yahrtzeit (yearly, at her day of passing) along with thousands of Jews from all over the world. The holy Rav Ades will bring with him a list of the people registered to participate in the tikkun — and he will pray for them all. 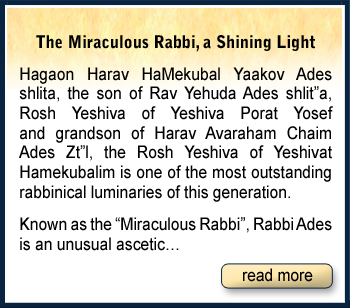